The Birth of Our Lady (Trakinės). Protectress of Lithuania. 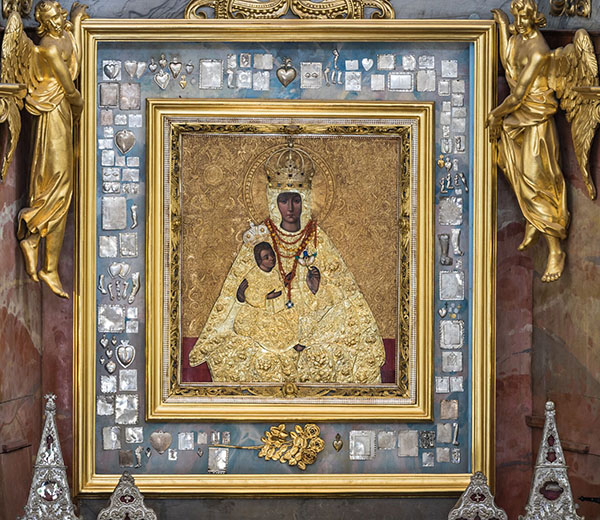 In September 2017, the Trakai church was raised to the status of a basilica and celebration of the jubilee year began. The title of basilica recalls the church’s historical significance as one of the very first churches built after the baptism of Lithuania in the 14th century. Lithuanian Grand Duke Vytautas funded the construction of the church. Devotion to the Trakai Mother of God began to spread in the 17th century amid wars and hardship in the Commonwealth of Lithuania and Poland. People would come here to pray before the image, which was renowned for special graces. Over the years it has served as a reminder of Vytautas’s majestic rule and the flourishing of the nation, becoming a pilgrimage destination for the state’s leaders, nobility and ordinary to pray for peace and prosperity in Lithuania.

On September 4, 1718, the Trakai Mother of God image was adorned with golden crowns sent by Pope Clement XI and received the title Health of the Sick. It was the first image of Mary in Lithuania to be crowned by the pope and only the second worldwide outside of Rome. People came to call her Protectress of the Grand Duchy of Lithuania, and later – Protectress of Lithuania. The coronation festivities lasted eight days, giving origin to the annual indulgence feast.

Today pilgrims come to Trakai from nearby places and all over Lithuania to celebrate the Feast of the Nativity of Our Lady. Hundreds of young people walk in pilgrimage each year from the chapel of the Gate of Dawn in Vilnius to the Trakai Basilica to pray before the image of the Mother of God, Protectress of Lithuania.

By decision of the pope, pilgrims to the Trakai Basilica can obtain a plenary indulgence during the jubilee year (until September 8, 2018) under the usual conditions: make a sacramental Confession, receive Eucharistic Communion and pray for the intentions of the Holy Father. The plenary indulgence can gained for oneself or for the souls in purgatory by making a pilgrimage to the Trakai Basilica between September 1, 2017, and September 8, 2018, and attending the jubilee services or dedicating time to contemplation and prayer of Our Father, the Apostle’s Creed and invocations to Our Lady.

Seniors, people who are ill and those unable to leave their home for an important reason can also obtain the plenary indulgence. They should free themselves from all attachment to sin and resolve to fulfil the three usual conditions when they are able, while joining in the jubilee celebration spiritually, offering their prayers, sufferings and difficulties of life to the Merciful God.

For more information about Trakai Mother of God, see the description of this pilgrimage site.