The Gate of Dawn Chapel of Our Lady of Mercy and St. Theresa’s Church 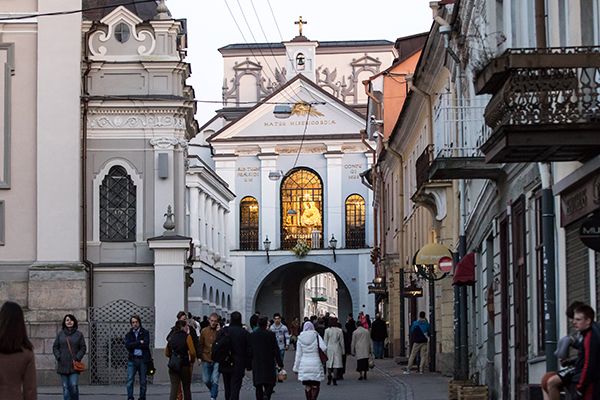 This Church is included as part of the following itineraries: The Route of Divine Mercy, Places of Marian Devotion, The Pilgrim Rout of St. John Paul II.

The Gothic-style Gate of Dawn is the only surviving remnant of the Vilnius defensive wall, which was built in the 16th century. The image of Our Lady of Mercy was initially hung outdoors, affixed to the inner side of the Gate, as a complement to the image of the “Redeemer of the World”, which was hanging on the outside of the Gate. The Discalced Carmelites, who came to Vilnius in the 17th century, built a chapel in the defensive tower of the Gate and moved the painting there as an object of popular devotion. Since then, St. Teresa’s Church has been closely linked to the image of Our Lady of Mercy of the Gate of Dawn. Initially, the chapel was accessible only from the garden of the monastery, with laypeople praying on the outside. A gallery for pilgrims was built in the late 18th century, and in the middle of the 19th century the chapel became accessible to all the faithful. The Gate of Dawn Chapel is considered the most significant legacy of the Carmelites of Vilnius.

The Gate of Dawn Chapel is also included within the European Marian Network, which links twenty of the most significant shrines honoring Mary in Europe.

Near the Gate of Dawn Chapel there is the Church of St. Theresa. It is one the most notable Late Baroque shrines, constructed without towers, in Lithuania. It was completed and consecrated in 1654. The Church belonged to the Discalced Carmelites, whose monastery complex bordered the fortification walls of Vilnius, and stretched over three city blocks. Today St. Theresa’s is the last remaining Church built by the Carmelites in Vilnius. The frescoes and illusionary altars, portraying the spirituality of the Carmelite Order and the life and works of St. Theresa, were painted between 1760 and 1764 by a local artist, Motiejus Sluscianskis. In the main altar there is a painting depicting the ecstasy of St. Theresa, as the angel pierced her heart with a spear representing the love of God.

During his visit to Lithuania Pope John Paul II said a Rosary at the Gate of Dawn Chapel. In one of his speeches he recalled, that immediately after being elected Pope, he rushed to the Lithuanian Chapel of Our Lady of Mercy in the Vatican Basilica grottoes, to pray. The Gate of Dawn Chapel is one of the oldest and most important places of pilgrimage in Lithuania. In the late 18th century this Shrine became a symbol of the struggle for independence and statehood for Lithuanians and Poles. The residents of Vilnius honored Mary of the Gate of Dawn as their patron. According to Saint John Paul II, “This Gate has become a special place of meeting with the Mother of Church and Christ, and a place of unity for the faithful of the entire region. Christians of Lithuania, Poland, Belarus, Ukraine and other countries gather here like brothers and sisters to share their faith, hope and love in the presence of the Virgin Mary.”

The icon of Our Lady of Mercy was painted in the early 17th century on oak boards and was based upon a painting by the Dutch artist Martin de Vos. This icon is a rare example of Madonna painted without the Child Jesus. It portrays the Blessed Virgin listening to the angel’s message, and also a Mother of Mercy, holding sinners in her heart’s embrace. In 1927 the icon was adorned with crowns blessed by Pope Pius XI and was given the title of the Mother of Mercy.