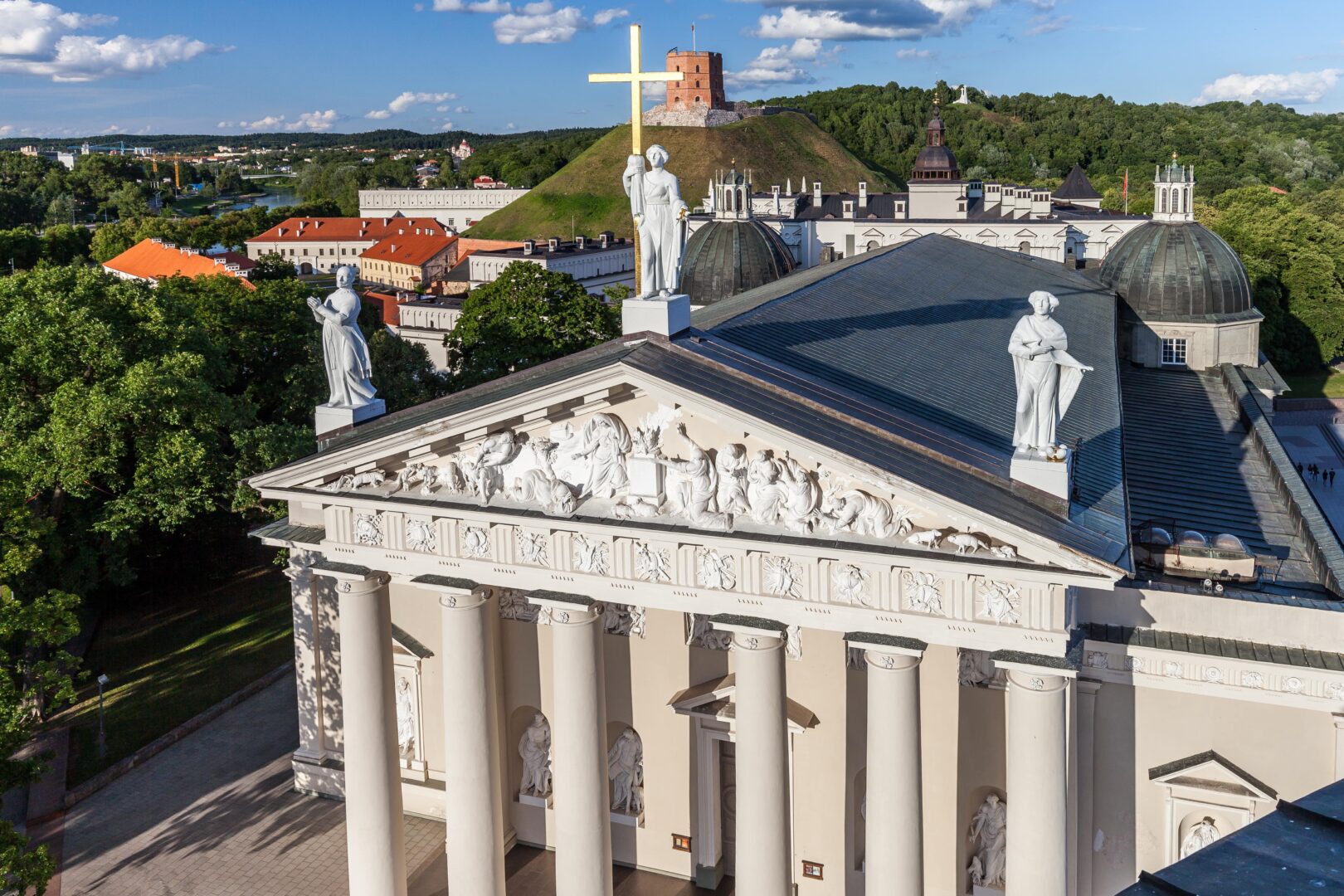 The Cathedral’s front pediment bears three monumental statues. On the left stands Bishop of Krakow and patron saint of the Vilnius Cathedral, St. Stanislaw. In the middle: St. Elena, the mother of the Roman Emperor Constantine. She discovered a cross in Palestine on which Christ was crucified. On the right is Prince St. Casimir, a patron of Lithuania, Poland and Lithuanian youth. These sculptures were created by K. Jelski, were demolished during the Soviet era and restored in 1997 by Stanislav Kuzma.
The Bible narrates how Noah, because he was a just man, was saved by God from the flood. Together with his wife, his sons and their wives, Noah took animals from all the species onto the arc. Sculptor Tommaso Righi depicted the sacrifice of thanksgiving that the survivors offered to God after the waters receded. Noah and the members of his family look toward the cross raised above the roof of the church, which symbolizes the salvation of humanity through Christ’s sacrifice.

This Church is included as part of the following itineraries: The Route of Divine Mercy, Places of Marian Devotion, Vilnius Saints, The Pilgrim Rout of St. John Paul II, Cathedral. Bell Tower. Treasury, The route of Saint Jacob.

St. John Paul II started his historic visit to Lithuania with a prayer at the Vilnius Cathedral Basilica, which he called “the beating heart of the Lithuanian nation”. Vilnius Cathedral is one of the oldest Lithuanian churches. It was mentioned for the first time in recorded history in 1387, the same year as the Christianization of Lithuania. The Cathedral received the title of St. Vladislaus because it was the baptismal name of Jogaila, the Grand Duke of Lithuania and King of Poland. The main altar features a painting portraying the death of St. Stanislaus, the patron of Vilnius Cathedral and the Bishop of Krakow. St. Stanislaus chastised the Polish King Boleslaw II the Bold for his cruelty and injustice, and eventually, he excommunicated the King. In retaliation, the King murdered St. Stanislaus during a Holy Mass. The painting was done by Pranciskus Smuglevicius, a famous Lithuanian artist.

Throughout 600 years of its existence, Vilnius Cathedral was rebuilt several times, until it acquired its current Neoclassical style at the beginning of the 19th century (architect Laurynas Gucevicius). The Cathedral was closed (1949-1988) during the Soviet occupation, and for a long time, it housed the Vilnius Art Gallery. Only in 1988, was the Cathedral returned to the faithful and then solemnly re-consecrated. The relics of St. Casimir, the patron of Lithuania and youth, were also returned to the Cathedral, and are now venerated in the magnificent Chapel of St. Casimir. The Gostautai Chapel in the right nave of the Cathedral features the painting of Sapiega Madonna. In 1750 the pope crowned this painting for numerous graces granted to the faithful. There are 11 chapels in the Cathedral. In addition to the previously-mentioned Chapels of St. Casimir and Gostautai, the pilgrims can also pray at the Holy Eucharist and Exiles Chapels, located in the right nave and St. Vladislaus and Valaviciai Chapels in the left nave.

Distinguished noblemen, rulers, bishops, and other clergymen of the Grand Duchy of Lithuania are buried in the crypts of Vilnius Cathedral. The King of Poland and the Grand Duke of Lithuania Aleksandras Jogailaitis, Queen Barbora Radvilaite, Queen Elzbieta Habsburgaite, and the heart of the ruler Vladislovas IV Vasa are buried in the royal mausoleum. In 1985 the treasury of the Cathedral was discovered. It consists of Lithuanian goldsmith masterpieces, which were hastily hidden in a niche between Gostautai and Exiles Chapels in the fall of 1939 after World War II began. Today the treasury of Vilnius Cathedral is displayed at the Church Heritage Museum.