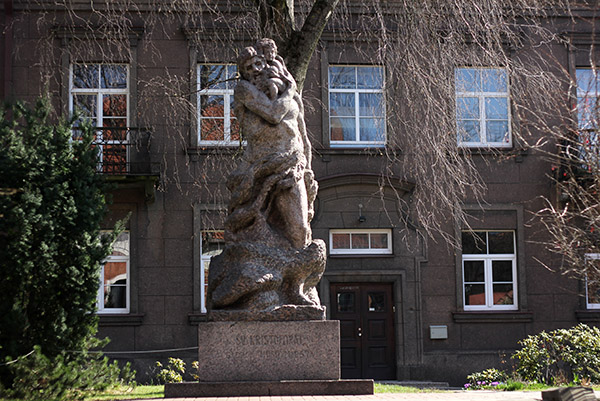 In 1959, a sculpture by Antanas Kmieliauskas of the patron saint of Vilnius, Saint Christopher, was erected near the Church. In a way it was an act of resistance, because the City emblem depicting this Saint had been banned by the Soviet regime. The sculptor was suspended from the Artists‘ Association, but the sculpture remained standing.
When the Vilnius Cathedral Basilica was closed during the Soviet period and the curia of the Vilnius Archdiocese was established in Saint Nicholas’s parochial house, this church performed the functions of pro-cathedral.

This Church is included as part of the following itinerary: Places of Veneration of Our Lady

This is the oldest Church in Vilnius, mentioned for the first time in historical sources in 1320 when Grand Duke Gediminas invited Christian European craftsmen and merchants to come to Vilnius. In his letter to the Franciscans in 1323, he wrote that a Church was built for them in Vilnius. The fact that the Church was associated with the arrival of merchants in the City is evidenced by its title of Saint Bishop Nicholas of Myra, who was considered a patron of travelers, merchants, craftsmen, prisoners of war, and children.

The Church’s brickwork was completed between 1382-1387. The project was overseen and financed by J. Jaunius (Janulis), the vicegerent of the Grand Duchy of Lithuania in Vilnius. The archaic Early Gothic architectural lines of the Church confirm this timeframe of the construction. The Church has been reconstructed and renewed several times, and as a result, its interior (vaulted ceilings, altars) represents the Late Gothic style of the 16th century and the Late Baroque architectural forms of the middle of the 18th century.

The Church is divided into three naves by graceful pillars, which uphold starry vaults. Crucified Jesus is above the great altar; above the left altar hangs a painting of St. Nicholas; and the right altar features a wooden painted image of Our Lady of Sorrows, adorned with goldplated metal coverings.

Between 1901-1939, the Church of Saint Nicholas was the only church in Vilnius where worship services were conducted in Lithuanian, so it became known as a source of Lithuanian culture. In 1930, a memorial dedicated to the 500th anniversary of the death of Vytautas the Great, was erected at this Church. In the post-war years, after Vilnius Archcathedral Basilica was shut down, St. Nicholas served as a pro-cathedral. In 1959, a sculpture of the patron saint of Vilnius, Saint Christopher, by sculptor Antanas Kmieliauskas, was erected near the Church. In a way, it was an act of resistance because the City emblem depicting this Saint had been banned by the Soviet regime.