The Church of the Discovery of the Holy Cross 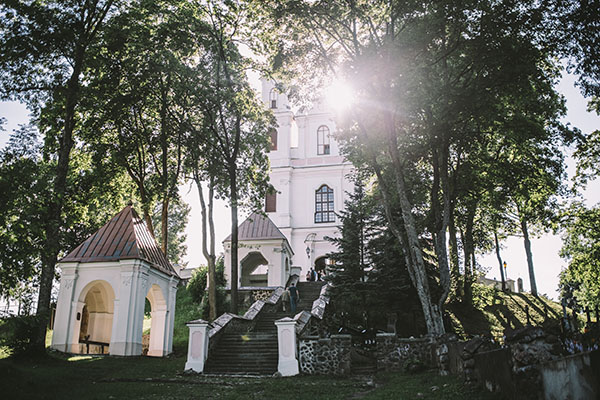 This Church is included as part of the following itineraries: The Route of Saint John Paul II, Vilnius Calvary Way of the Cross, Dominicans in Vilnius.

Vilnius Calvary Way of the Cross was officially dedicated in 1669, as a sign of gratitude to God for the victory against the tsarist Russian army, which had been causing devastation in the Vilnius region for several years. Vilnius Holy Spirit Dominicans were the caretakers of this place, and with the support of noblemen and prominent religious figures, built the Church of the Discovery of the Holy Cross and twenty new chapels here in 1772. Until the 20th century, this ensemble remained mostly unchanged, though some damage was caused by the army of Napoleon. Later, the Church suffered extensive damage during the Soviet occupation. One night in 1962, the Soviet authorities blew up most of the Stations of the Cross, but people’s devotion to Christ’s Suffering did not stop. Members of religious orders operating in secrecy and groups of the faithful continued to walk the Calvary Way of the Cross. Reconstruction of Vilnius Calvary Way of the Cross began after Lithuania regained its independence and was completed in 2002. The current Way of the Cross is 7 km in length and is comprised of 35 Stations.

The Church of the Discovery of the Holy Cross is located at both the geographical and ideological center of Vilnius Calvary. The Church, built on a high hill in Calvary, topographically corresponds to the Golgotha Hill. The main altar, also known as the Crucified Jesus altar, is the most important Station of the Cross, dedicated to the remembrance of our Savior’s Death on the Cross. The sculpture of the Crucified Jesus is considered miraculous by the faithful. At the altar located on the right side of the Church, across from the pulpit and the baptismal font, and under the image of Divine Mercy, a relic of the Holy Cross is displayed. Church walls and vaulted ceilings are decorated with impressive 18th-century frescoes.

Several noteworthy objects include a painting of Our Lady of Sorrows, which is venerated at the altar of the Blessed Virgin Mary, as well as the altar of St. Hyacinth, both located in the left nave. Also notable is a 17th-century painting of Our Lady of the Rosary – typical for Dominican churches – which is displayed above the image of Divine Mercy.