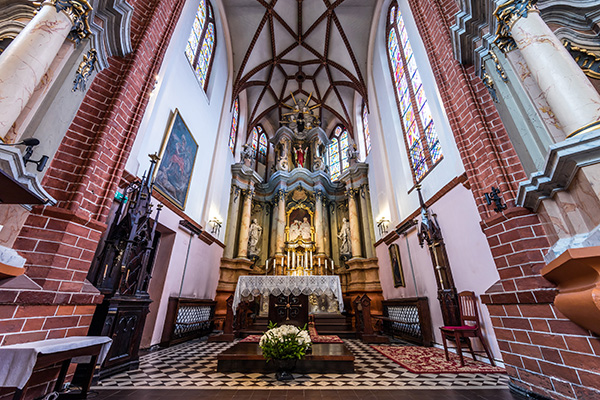 This Church is included as part of Places of Marian Devotion.

St. Anne’s Church is often called a Gothic masterpiece and a gem of the Flamboyant Gothic style. It was built between 1495 and 1500 as a Chapel for the Brotherhood of St. Anne, near the Bernardine Church, which at that time, was constructed of wood. The most important document supporting these facts is the privilege of indulgence, which Pope Alexander VI granted to St. Anne’s Church in 1501, as he encouraged the faithful to maintain and attend the Church in abundant numbers. The Brotherhood of St. Martin operated at St. Anne’s, and in doing so, united Catholics of German origin and Catholics of other countries.

Using the plans of renowned architect Johann Christoph Glaubitz in 1747, three altars were constructed of masonry materials which remain unchanged to this day. Other major renovations were carried out between 1902-1909 and 1969-1971. According to legend, Napoleon Bonaparte was so fascinated by the beauty of the Church that he even commented he would like to put it in the palm of his hand and take it to Paris. However, his army caused significant damage to the interior of the Church by using it as a munitions warehouse and later, to imprison captives.

In the main altar hangs a painting of the Blessed Virgin Mary with Child and St. Anne, from which the title of the Shrine originated. The painting features three generations: the patron of the Church St. Anne, her daughter – the Blessed Virgin Mary and Child Jesus – the Son of Virgin Mary, and the grandchild of St. Anne. Ornate coverings on this image and the prevalence of girls named in St. Anne’s honor attest to a special devotion to this saint in Lithuania.