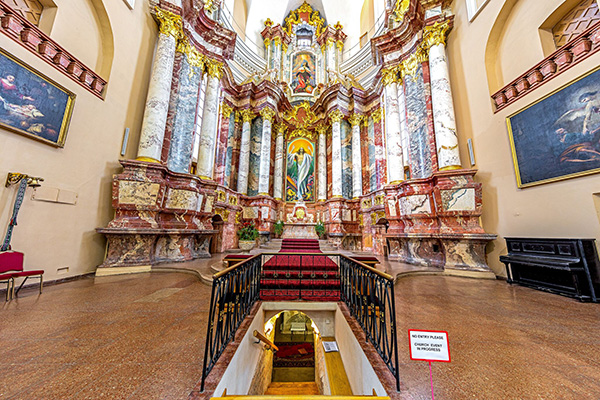 In the 17th century, a Jesuit burial site was created in the crypt under the main altar of the Crucified Jesus. The crypt was discovered by chance in 1991. After its discovery, over 200 remains found in other crypts of St. Casimir were re-buried here. A relic of St. Andrew Bobola, who was ordained in 1622 and then served as a priest here for twelve years, is venerated in this crypt.

This Church is included as part of the following itinerary: Vilnius Saints.

St Casimir’s Church is the second in Vilnius established by the Jesuits and built to honor St. Casimir, the patron of Lithuania. It was conceived as the most important Jesuit Church in the Grand Duchy of Lithuania. Its construction began in 1604, following the canonization of St. Casimir. The construction of St. Casimir Church and the Jesuit monastery coincided with the establishment of the Lithuanian Jesuit Province. This monastery was the most important and significant building within the Jesuit Province of Lithuania because living there were the provincial and other monks, who had completed their entire formation and had taken their final solemn vows (three conventional monastic vows plus the fourth Jesuit vow of obedience to the Pope).

St. Casimir Church was built using the design of the Jesuits’ beloved Church of the Gesù in Rome as a model and is among the earliest Baroque shrines with the Latin cross plan and cupola. After the last fire in 1749, the Church was reconstructed, and a new multi-tiered cupola with a crown was added. St. Casimir’s cupola is one of the finest in Europe.

In the 17th century in the crypt under the main altar of the Crucified Jesus, a Jesuit burial site was set up. It was decorated with monochrome paintings depicting the Crucifixion, the Resurrection of Christ, the Blessed Virgin Mary, and images of the departed monks portrayed kneeling and praying in their coffins. It is believed, that the crypt was filled in during the restoration of the Church, after the Russian Cossack attacks in the middle of the 17th century. The crypt was discovered by coincidence in 1991. After its discovery, over 200 remains found in other crypts of St. Casimir were re-buried here. A relic of St. Andrew Bobola, who in 1622 was ordained and then served as a priest here for twelve years, is venerated in this crypt.

In the 18th century, thirteen masonry altars were installed at St. Casimir Church, but only the main altar and the two altars located on either side of it remain. Some paintings recovered from the demolished altars are now displayed in the Church of Sts. Johns. The main 18th-century Baroque altar features the works of a renowned contemporary painter – Antanas Kmieliauskas.

Following the Uprising of 1831, St. Casimir’s Church was closed. Between 1864 and 1868 it was remodeled and then became the Eastern Orthodox Cathedral of St. Nicholas. At that time the height of the Church towers was reduced and, subsequently, the Church was crowned with onion-shaped domes. During the interwar period, the Church was returned to the Catholics; during the Soviet occupation it housed the Museum of Atheism, and it was finally returned to the Jesuits only after Lithuania regained its independence.