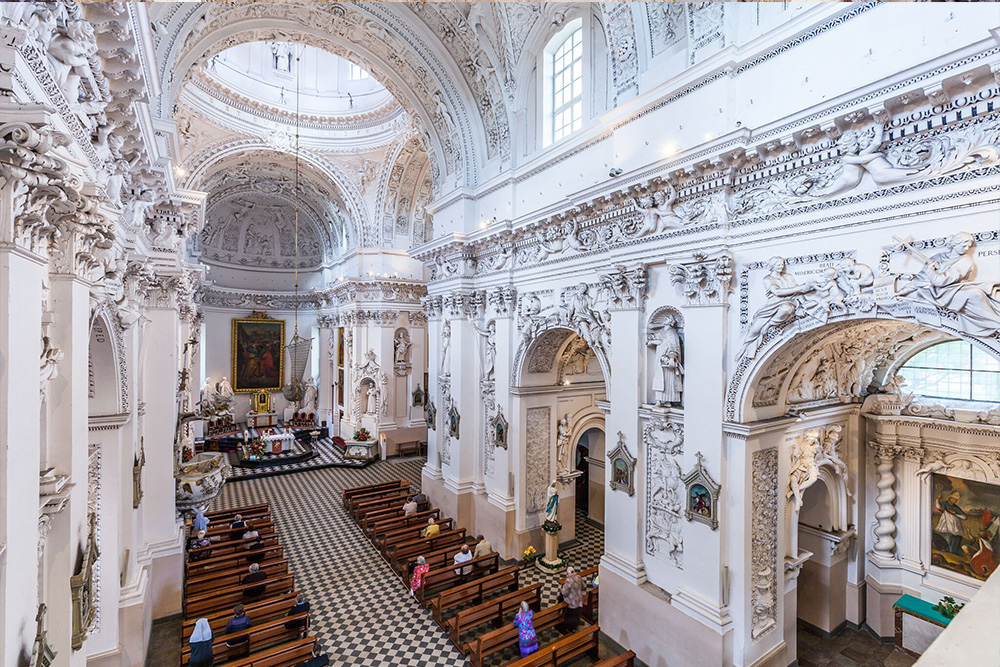 This church is distinguished by a special interior encompassing numerous stucco figures – approximately 2040 sculptures depicting human figures, along with many others. The iconography of the décor expresses the basic values of the monastic order and its patron Pac.

This object is included as part of the Places of Marian Devotion.

Vilnius Sts. Peter and Paul Church is one of Lithuania’s most famous Baroque buildings, with an exterior and interior design that has changed little since its construction. It is one of a few churches in Vilnius, which has operated uninterrupted as a Catholic place of worship. The Canons Regular of the Lateran monks settled at this site in 1625. It is thought, that several wooden churches occupied the site of the current Church from the end of the 16th century until they burned down. The construction of the current masonry Church began on June 29th, 1668, which was also Sts. Peter and Paul feast day. People prayed for the intercession of Mary to bring peace to a war-ravaged Lithuania. This intention is evidenced by the inscription on the facade of the Church “Regina Pacis funda nos in pace” – “Queen of Peace, strengthen us in peace”. This rhetorical Baroque play on words is reminiscent of the benefactor of the Church’s construction – Mykolas Kazimieras Pacas, Voivod of Vilnius and principal commander of the army of the Grand Duchy of Lithuania. His remains rest in the Church’s basement under the threshold.

In 1678 two great Italian sculptors – Giovanni Pietro Perti and Giovanni Maria Galli – came to decorate the Church. This Church is considered Vilnius’s Late Baroque gem due to the Italian artists’ stucco sculptural decor. Iconography within the Church’s interior expresses the fundamental values ​​of the Lateran monks and the principles of its patron, M. K. Pacas, who remained chaste until his death. Those principles include the importance of the Church’s teachings, Baroque humility of the powerful, and fighting and suffering for faith and chastity. They are reflected in the Church’s chapels: St. Augustine, patron of Canons Regular of the Lateran; St. Queens; Holy Knights the Martyrs; and Holy Virgins the Martyrs.

Above the main altar is a painting by Pranciskus Smuglevicius titled “The Farewell of Sts. Peter and Paul”. The Vilnius Fishermen Brotherhood provided the painting, “Five Wounds of Jesus”, which is venerated above the right side altar. A wooden statue of Jesus of Nazareth, which was sculpted in Rome and based upon the miraculous image of Ecce Homo located in Madrid, is also venerated in this Church. Visitation records of 1804 reveal that stamped relics were enclosed within Jesus’s head, which was assembled of two parts.

The painting of the Blessed Virgin Mary the Gracious (above the altar on the left) is a copy of an image, venerated in the town of Faenza, Italy, which was brought to Vilnius by Samogitian Bishop Jurgis Tiskevicius. The painting depicts Mary breaking the arrows of God’s wrath. During the raging epidemics, Vilnius residents prayed by this painting for the intercession of Mary. Displayed nearby is a later painting depicting Blessed Virgin Mary the Gracious and a scene of Vilnius suffering the plague.