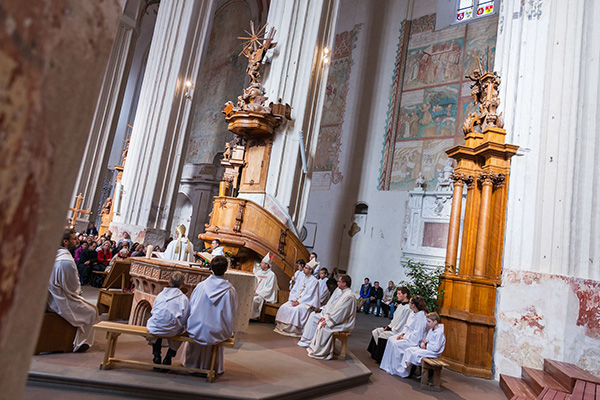 This church is decorated with Gothic polychrome frescoes from the 16th century depicting the life of St. Francis of Assisi.

This Church is included as part of the following itineraries: Places of Marian Devotion, the Way of Mercy, the Route of the Franciscans

As one of their missions, Bernardine monks arrived in the Grand Duchy of Lithuania during the middle of the 15th century. The first wooden church was built in the 15th century by the Vilnius Bernardines – Franciscan Observant Friars, who sought to live guided by the ideal of the monastic life of St. Francis of Assisi (1182-1226). The original wooden church burned down, and its replacement constructed of brick, had to be dismantled due to structural mistakes.

The current Church was built between 1506-1516, and included the presbytery with monastic choir and sacristy, which had been preserved from of the dismantled church. The Church was considered one of the largest and most beautiful buildings in the City. The Bernardine Monastery, which was built together with the Church, had a noviciate, seminary, a scriptorium and a library. Bernardines were reknowned for their ability as preachers and as tradesmen. After the uprisings of the 19th century, the Tsarist government closed the monastery. After the Second World War, the Vilnius Art Institute (now the Academy of Fine Arts) was established in this monastery. During Soviet years the Church was turned into a warehouse for the Institute of Art. Later, Franciscans re-consecrated the Church, which had been returned to them in 1994.

Thirteen wooden altars of Late Baroque style were restored and survive to this day. In the naves of the Church, one can admire Gothic style crystal, cross and star vaulted ceilings. The nave walls are decorated with Gothic polychrome frescoes, consisting of colorful compositions of figures from the Bible, life of St. Francis of Assisi and hagiographic themes. These frescoes were created in the 16th century and are considered unique.

The oldest known sculpture of the Crucified Jesus in Lithuania dating to the 15th century, can be seen in this Church. Today it is located in the right nave Chapel of St. Florian (Three Kings). Bernardine devotion for the suffering of Christ is also evident in the churchyard Calvary construction, which began in the 17th century. Later, the Way of the Cross was erected in the chapel near the Church. Only one station called Scala Sancta, has survived from the old Calvary to this day. In it, there is a replica of the Holy Steps, which St. Helena brought from Jerusalem to Rome. The chapel is accesible through the Neo-Gothic belfry built in 1874.

The image of Our Lady of Sorrows was painted in 1699, when the rights to hold an Indulgence Feast of the same name were granted. The painting, with metal coverings, is hung at the altar of “Sokala” or Russian Mother of God, which is located on the left side of the central altar. This image is one of the most renowned Marian images, which is famed for its graces, and which is related to the Lithuanian and Polish Bernardines.