The Shrine of Divine Mercy 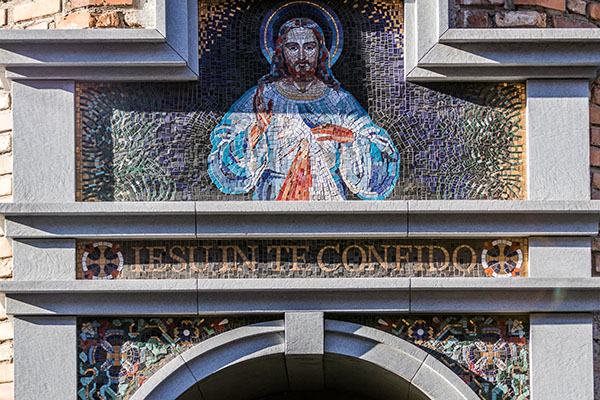 This object is included as part of The Route of Divine Mercy.

The original image of Divine Mercy, which was painted in Vilnius, is presently venerated at the Shrine of Divine Mercy. The picture was painted in 1935 by Eugene Kazimirowski and was based upon St. Faustina’s visions, which she received in Vilnius. In His appearances to a sister Faustina Jesus said: “I promise that the soul that will venerate this image will not perish. I also promise victory over [its] enemies already here on Earth, and especially at the hour of death. I will defend it as My own honor” (Diary 48).

During his visit to Lithuania St. John Paul II prayed by this image, which at that time was venerated at the Church of the Holy Spirit. The Pope urged the faithful to become true children of the Heavenly Father, dedicated disciples of Jesus, and obedient instruments of the Holy Spirit. St. John Paul II said that “Faustina was such an instrument of God. She trusted the words of the Savior and fulfilled His request to have His image painted, which would bring solace and peace to all.”

During the 15th and 16th centuries, the Holy Trinity Church stood on the current site of the Shrine of Divine Mercy. The Church was reconstructed in the 18th century and belonged to Vilnius University. In 1821 the tsarist government converted the Shrine into the Orthodox Church of the Apparition. In 1920 the Shine was reclaimed by the Catholics. During the years of 1946-1947, St. Faustina’s confessor Blessed Fr. M. Sopocko was the pastor at this Church. After World War II the Soviet regime closed the Church. Cardinal Audrys Juozas Backis founded the Shrine of Divine Mercy with his decree of March 8, 2004. The image of Divine Mercy was relocated to the Shrine’s central altar.

Dominikonu St. 12, Vilnius
The Shrine is open 24 hours a day.